A Million Junes by Emily Henry is a YA fantasy stand-alone with contemporary, magical realism mixed in. 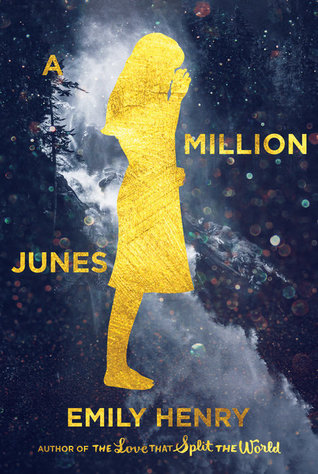 “Romeo and Juliet meets One Hundred Years of Solitude in Emily Henry’s brilliant follow-up to The Love That Split the World, about the daughter and son of two long-feuding families who fall in love while trying to uncover the truth about the strange magic and harrowing curse that has plagued their bloodlines for generations.

In their hometown of Five Fingers, Michigan, the O’Donnells and the Angerts have mythic legacies. But for all the tall tales they weave, both founding families are tight-lipped about what caused the century-old rift between them, except to say it began with a cherry tree.

Eighteen-year-old Jack “June” O’Donnell doesn’t need a better reason than that. She’s an O’Donnell to her core, just like her late father was, and O’Donnells stay away from Angerts. Period.

But when Saul Angert, the son of June’s father’s mortal enemy, returns to town after three mysterious years away, June can’t seem to avoid him. Soon the unthinkable happens: She finds she doesn’t exactly hate the gruff, sarcastic boy she was born to loathe.

Saul’s arrival sparks a chain reaction, and as the magic, ghosts, and coywolves of Five Fingers conspire to reveal the truth about the dark moment that started the feud, June must question everything she knows about her family and the father she adored. And she must decide whether it’s finally time for her—and all of the O’Donnells before her—to let go.”

This book was really interesting. I never really put it together that with the family feuds make up the basis of this is similar to a Romeo and Juliet feel except that it is set in a modern day world. I really liked this world. The author slowly turns the book from what I thought was a contemporary to a completely different book filled with paranormal, magical realism.  I loved it!

The characters are mysterious to say the least. We were given small snip-bits into their backstory which explodes in the end. This book was an enticing read full that had me engrossed until the end.

I was a little confused when it came to the side characters. I’m not sure if it was from reading this book fast (which this story was a VERY quick read for me) or if it was from those characters having a back-and-forth, who-do-I-want mindset. Either way, it didn’t distract too much from the story.

I loved how the mystery behind the two families drives them together. Even the main characters are feeling like there isn’t a need for the rival.

There are a few typical YA aspects throughout the romance of the story. I could tell right away that something was going to happen, but it took the whole book to form up to the point, so it didn’t ruin it for me (because I really can’t stand insta-love stories).

Overall, I gave this book 4 out of 5 stars. The story, the characters, and the plot really caught my interest within the first few chapters. I highly recommend this book if you are stuck in a reading slump because you will fly through it. The action in the last quarter of the book keeps you turning to the next page and the next.. It is a story about letting the past go and how death can affect those left behind. This was an awesome summer read!

How I Read It: eARC from Penguin Random House

**Disclaimer: I received an eARC copy of this book in exchange for an honest review by the publisher. All review content is of my opinion only and was not influenced in any way.**

Stay tuned for more book reviews and fun bookish posts weekly! You can subscribe below for instant links to each of my posts and help share the love of YA!