Cinderella Inferno by F.M. Boughan is the sequel to Cinderella, Necromancer, a YA fantasy re-telling of Cinderella.

It’s been two years since Ellison defeated her stepsisters and sent her evil stepmother back into the Abyss.

Though she’s learning to control her dark magic and has spent time traveling with Prince William and bringing peace to the kingdom, one fact remains. She is a necromancer and he is a paladin of light. And so, the king refuses to give his blessing for them to marry.

Ellison resolves to descend into hell to save her mother’s soul and bring her physical body back to the world of the living. William hopes this good deed will bring Ellison into favor and finally allow them to be wed.

But the journey through hell is fraught with peril. Temptations abound and the demons Ellison sent back to the Abyss are thirsty for revenge.

Evil cannot be defeated without sacrifice—but when that sacrifice means choosing between the ones Ellison loves and her very own life, how far is she willing to go to make her family whole again?“

This sequel definitely lives up to the first one!

I loved the darker, slight re-telling of Cinderella that doesn’t allow the main character to fully get her happy ending, at least for now. If you loved getting into Cinderella, Necromancer, you’ll slowly fall back into Inferno. It did take me a hot minute to get to back into to the story, but once I was, I devoured this book in only two sittings.

I will say that it felt like this one had a more adventure-type vibe than the first book. There are less Cinderella elements as we get more into the evil spirit business of the magic following the last two years. I will say that I thought Inferno was a darker tale as the internal and external struggles take over between the characters, and the relationships seem to rumble.

I gave this sequel a 4 out of 5 stars. The more in-depth looks into the other characters brought the world together and left me wanting more!

There aren’t very many Cinderella series in YA, so take a grab at this one this summer!

How I Read It: eBook from Chapter by Chapter Blog Tours 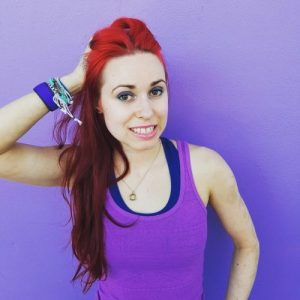 “F.M. Boughan is a bibliophile, a writer, and an unabashed parrot enthusiast. She can often be found writing in local coffee shops, namely because it’s hard to concentrate with a cat lying on the keyboard and a small, colorful parrot screaming into her ear. Her work is somewhat dark, somewhat violent, somewhat hopeful, and always contains a hint of magic.”

*Disclaimer: I received a free copy of this book through the Tour Host in exchange for an honest review. All of my book reviews contain my honest opinion only and are not influenced in any way.*

Check out other Bloggers’ thoughts through the Official Blog Tour Schedule!

Interested in reading this book for yourself??Click HERE to jump on over to Goodreads AND

Purchase the book through either of the links below!