Watch You Burn by Amanda Searcy is a YA Mystery, Thriller of a girl who has an obsession with fire, a much-needed friendship, and the mysterious feeling like someone is constantly watching you.. 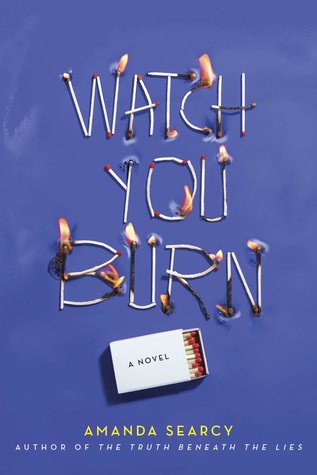 “Jenny didn’t want to move to the creepy, possibly haunted town with her dad. But the cops are on to her, and the only way she can protect herself is by moving as far away from her hometown as possible and staying out of trouble.

But even after she moves, Jenny still gets the itch. The itch to light a match and then watch it burn.

It’s something she hasn’t been able to stop, ever since an accident years ago. Now, in a new town, Jenny has the strange feeling that someone is watching her every move. Will her arsonist ways be exposed? Or is the burning truth deep inside her a greater danger?“

This was a really interesting read. There are tons of mysterious circumstances scattered through the plot that constantly made had me trying to piece them together.

We follow a main character who has had a pretty traumatic history surrounding fires which quickly turned into her obsession. And it took me about halfway through the book to figure out what was going on. She’s now living with her father, who she hasn’t seen in years, which in and of itself is unique. She’s literally living in a fantastic, remodeled suite in the middle of a run down motel, which is also in the middle of nowhere.

I felt like going into the story, there was a lot that I had to try and piece together before I had a solid understanding of where everything was going. But I wouldn’t say that it’s a bad thing. Because this is a mystery thriller novel, and a decent one at that. Once the plot thickened, I could tell that this was going to be a book that would leave tons of questions until the last chapter. And it was.

The characters were all over the place for me. The main character, Jenny, is struggling with her past and the threats that her burning obsession may lead to in the present. Discovering her history with the fires and her burning itch was one of the aspects that kept me reading, trying to understand where she was coming from. She’s unpredictable, but she doesn’t necessarily want to give in. She meets some friends that bring their own pasts to the table, and there’s even a romance snuck in there.

Overall, I gave this book a 3 out of 5 stars. I really enjoyed the tense moments and the plot twists that squeezed in during the second half of the book. Even though there is a lot of stuff we are introduced to in the first half with a slower pace, once I got through that fog, I was able to really enjoy the story itself and rush to the end. This was a really well developed mystery that created a maze of possibilities. I couldn’t stop reading it until I figured out how it all pieced together!

A great book if you’re looking for a lighter, thriller novel for the Fall season!

How I Read It: eARC from NetGalley

*Disclaimer: I requested a free copy of this book from NetGalley in exchange for an honest review. All of my reviews and bookish content contain my honest opinions only and are not influenced in any way.*

One thought on “Watch You Burn by Amanda Searcy”