Flutter & Falter by Carrie Aarons are books 3 and 4 in a Adult Contemporary Romance series releasing later this month! 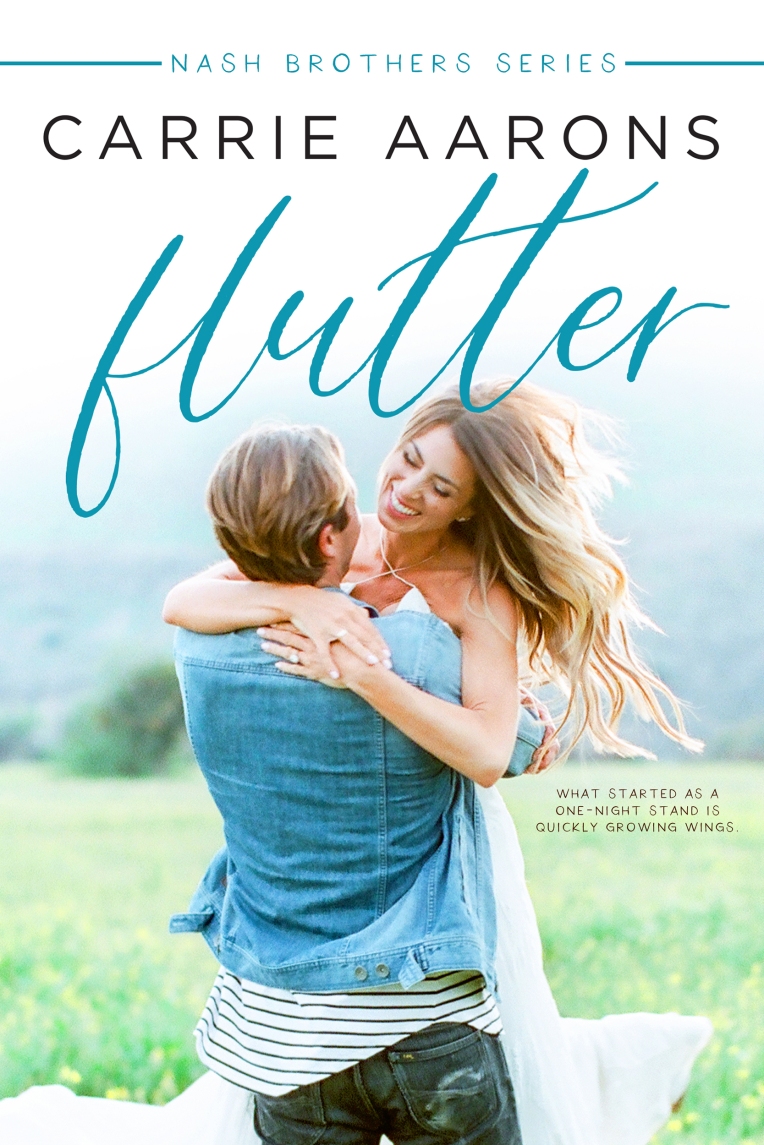 “He can’t stand her, and best believe, the feeling is mutual.
Her life is the complete opposite of what he desires.
So, why can’t they keep their hands off each other?

Forrest Nash is a smug know-it-all. With his brains, ridiculous good looks and penchant for disobeying the laws of both the police and the dark web, Fawn Hill’s resident genius is cockier than any man Penelope Briggs has ever encountered. It doesn’t help that their six-year age difference makes him completely ineligible in her eyes. Add in the fact that he doesn’t want marriage or babies, and that should eliminate him from the dating pool forever. But it doesn’t mean she can’t sleep with him. Once. Or twice. Or ten times. Against all logic, though, Forrest seems to be sneaking into her heart at the same time he’s sneaking into her bed.

Penelope Briggs is one bossy, obnoxious woman. With three young children, a calendar full of school drop-offs and sports, and enough emotional baggage to fill an airplane, this widow is definitely not what Forrest Nash is looking for. And yet, he can’t get enough of the maddening bombshell. But as their hook-ups become a constant, so does his involvement in Penelope’s life. The things he swore he never wanted, love and kids, seem to be the only things on his mind. And when an attack from his part of the cyber world threatens her safety, he’ll have to admit his feelings for the woman he’d do anything to protect.

What started as a convenient friends-with-benefits situation is quickly growing wings. Even if both parties are trying hard to ignore the flutter.” 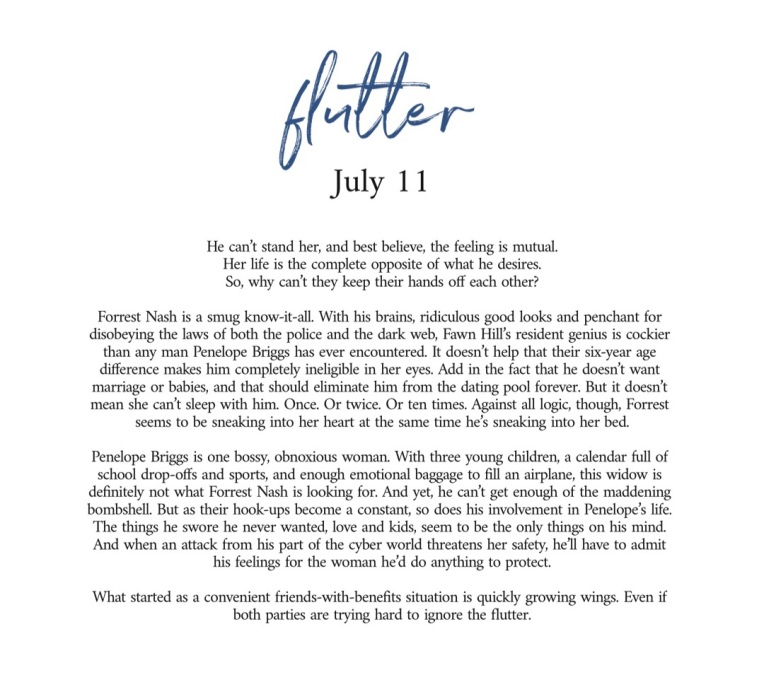 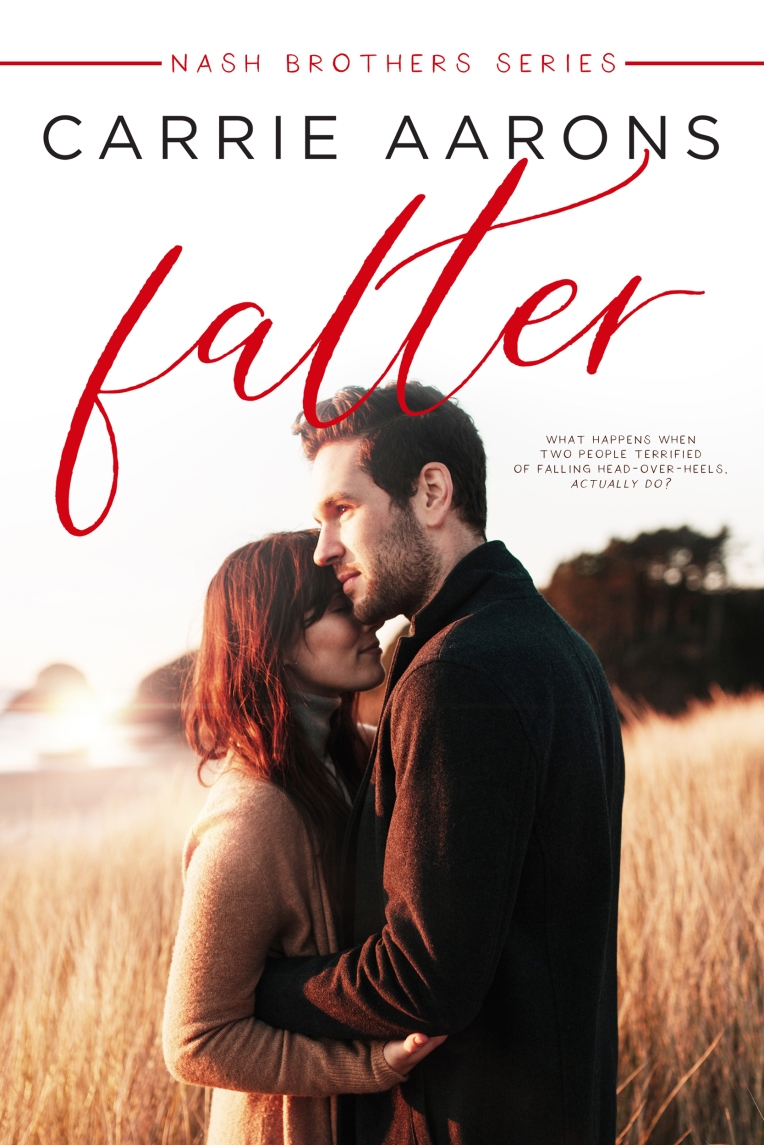 “Ryan Shea has sworn off men.

After her last relationship imploded in front of her eyes, she decides to take a break from swimming in the dating pool … possibly forever. The brilliant computer whiz loses her brain when it comes to love, and jumping feet first burns her every time.

Without a home, or much of a clue where life is headed, taking a trip back to the small town of Fawn Hill to stay with her best friend seems like the only option.

Except it puts Ryan directly in the path of the one man she can’t fall for. Fletcher Nash reminds her too much of the dark past she’s always run from; his demons are the things of her nightmares. And it’s no help that, when he looks at her, she feels as if Fletcher is the one person who truly understands.

Fletcher Nash vowed not to fall in lust.

Five years of sobriety, and he hasn’t broken the chastity promise yet. Not that it had to keep for this long … he’s well over the normal year addicts are told not to get involved.

But, aside from a busy schedule and trying to chase his dream of becoming a full-time artist, he has no intentions of committing to a woman until she is the one.

Why is it, then, that sassy, city girl Ryan Shea comes dangerously close to resembling the exact woman he could break that promise for? Like sand through his fingers, there is no way she’ll stay put … but his heart just won’t listen.

They pledged not to love anyone until it was the real thing.
So what happens when two people terrified of falling head-over-heels, actually do?” 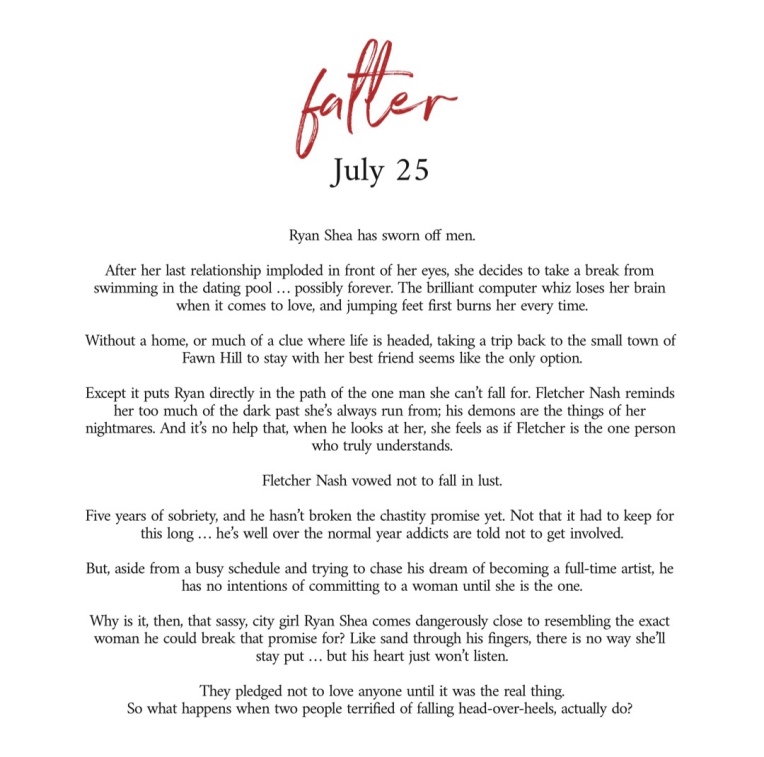 “Author of romance novels such as The Tenth Girl and Privileged, Carrie Aarons writes books that are just as swoon-worthy as they are sarcastic. A former journalist, she prefers the love stories of her imagination, and the athleisure dress code, much better.

When she isn’t writing, Carrie is busy binging reality TV, having a love/hate relationship with cardio, and trying not to burn dinner. She lives in the suburbs of New Jersey with her husband, daughter and Lab/Great Dane rescue.”

This Cover Reveal is organized by: Carrie Aarons!