Awakened by Mini Boyce is an Adult Paranormal Romance of a “secret lineage, a ruthless vampire, and forbidden love.” 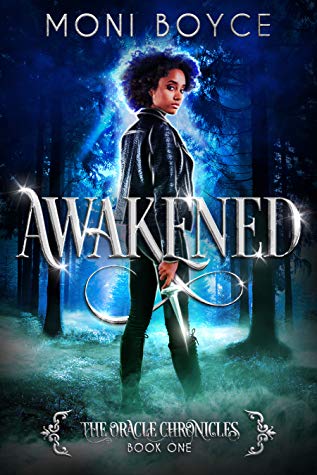 “Willow Stevens dreams of stardom are eclipsed by the real nightmares of a sinister man haunting her dreams. Unbeknownst to her, Eli Walker, her hot but snobbish co-worker, may know the reason nightmares plague her, but their history shows he is more prone to reject her, than help her.

Then Willow passes out at work only to wake in Eli’s apartment. There she has her chance to learn more about her heritage. But, knowing why the vampire king stalks her doesn’t make the nightmares disappear. If anything, they become more real as she now faces off against a slew of creatures she’d always believed were myth.

That Eli is one of those creatures is just her luck. Secret witch guild or not, his natural ways are casting spells her heart can’t escape. As a Protector his only focus should be her safety. Anything else is forbidden. He plans to stay on task, but some women break a man, or tempt him to break the rules.

Can Eli keep Willow alive and safe from the vampires long enough for her to grow her own powers or will both cast aside rules for a reckless passion that will only lead to danger?

AWAKENED is the first installment in The Oracle Chronicles series. This interracial, paranormal romance is a great mix of magic and adventure.

**This book is part of a series and ends in a cliffhanger.**”

“A couple minutes later, she followed him. Whatever he’d prepared smelled delicious. He moved around the kitchen unsure. She raised her eyebrows while she watched him. He caught the gesture and looked embarrassed. “Most of the time, I cheat and use magic so I can do something else. I haven’t manually cooked in a while.”

She looked at him wide-eyed, with her mouth gaped open. Even though he’d told her earlier, they were witches she still was having a hard time believing it. “You cook with magic, like they do in Harry Potter? That’s so cool. I know you told everyone not to use it, but just show me a little something. I won’t tell.” Awe and child-like wonder permeated her voice. “Cross my heart.” She made the sign of the cross over her heart.
“You heard everything didn’t you?” His eyebrow quirked upwards, daring her to lie.

She gave him a sheepish smile and looked away before she continued talking about magic, in the hopes he’d forget her listening to their conversation. “I would be the ultimate multi-tasker if I was a witch. Say ‘Abracadabra’ and make the food magically appear on the plate or something.” Willow was giddy with excitement.

Eli chuckled. “I’m not a wizard. I don’t say ‘Abracadabra.’” He shook his head.

His explanation confused her. “What does that mean? I thought wizard was a name for a male witch.”

He sighed and put down the pot he was holding. That comment appeared to get his undivided attention. “You watch too much television. First, regardless of gender, we’re known as witches, those of us that practice white magic. Warlocks are witches that practice black magic. Wizards are charlatans, posers. They don’t know magic, but are exceptional at trickery so they can give someone who doesn’t know any better the illusion they do.”

She digested the information he’d just given her.

“That’s why everyone went silent earlier when Matty referenced black magic, because none of you practice it?”

He nodded and picked up the pot of noodles. “Yes. Now may I finish making dinner?”

“So you’re not going to cook with magic?” She was expecting him to do tricks and wow her. Disappointment marred her brow, when he didn’t whip out a magic wand or say a spell.

“You just said so yourself, that you overheard me tell everyone magic is off limits.”

Her shoulders slumped in discontent and she pouted. “You can’t do even a tiny little spell?”

She rolled her eyes. “Great. A witch who can’t do any spells or magic.”

Eli looked offended. “I didn’t say I can’t do magic. I’m just unable to do any at this time.”

He bristled at her disinterest and she had to hold back a sly grin. “Wizard.” She mumbled under her breath, knowing it would get a rise out of him.

If she lit a match and threw it at him, he would have gone up in flames he was fuming so hard.

“Moni Boyce is a writer, filmmaker, travel blogger and author of contemporary and paranormal romance. She spent the last fifteen years working in the film industry and now creates characters of her own and brings them to life on the page. Moni has ghostwritten romance novellas and novels for over a year now and decided to put some of her own creations out in the world. She considers herself a bookworm, film buff, foodie, music lover and an avid world traveler having visited 33 countries, 5 continents and 27 US states so far. She runs a travel blog titled She Wanders the Globe and lives a bit of a nomadic life, but considers Los Angeles home. Which is the subject of her first travel book: Greater Than A Tourist – Los Angeles, California: 50 Travel Tips From A Local.

Sign up for her newsletter and get more information on future books and events on her website: https://moniboyce.com

Visit her travel blog at: http://shewanderstheglobe.com”

Enter for a chance to win: