Sweet Promise by Jennifer Woodhull is an Adult Contemporary Romance between a British chef and his new co-host! 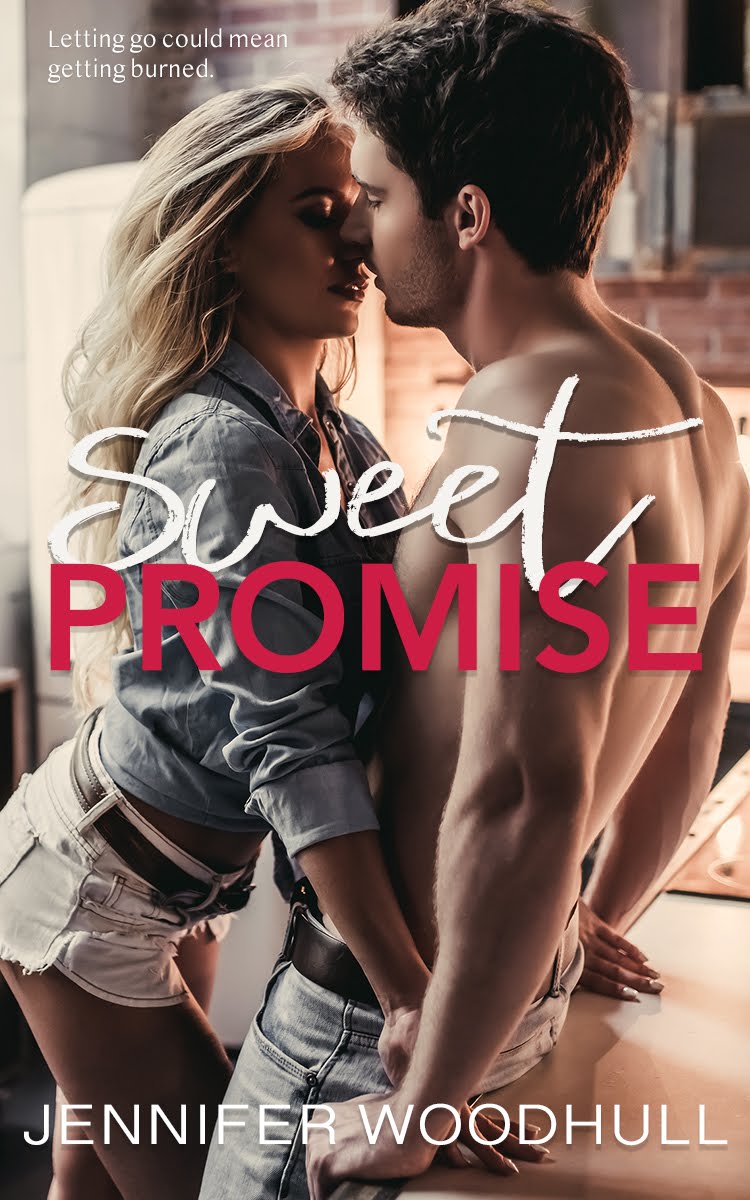 When I won the Southern Baking Championships right out of high school, I never imagined how far that success would take me. The first season of my baking show was a hit, and I love what I do.

I’m almost twenty-one, not a teenager anymore, and as it turns out, my agent thinks my girl-next-door image needs to grow up a little, so she sends me on an audition for a new show.

When I find out that I’m auditioning to co-host with the sexy British celebrity chef I’ve admired for years, I can’t believe my luck.

Lucas has had a lot of trouble the past couple of years, though. A nasty divorce. Binge-drinking. Partying. We won’t even talk about those pics of his impressive package that were splashed all over the tabloids.

I’m supposed to be the solution to all Lucas’ problems. Meeting him, though, is just the start of mine.

When we set off on a European filming tour, sparks fly.

Lucas is definitely bringing the heat.

I just hope I don’t get burned.

Plenty of heart, sexy heat, and full of international destinations and some exciting twists and turns, Sweet Promise delivers a satisfying happily ever after between a sweet, Southern baker and a sexy, British alpha male chef. The first book in the Promise Series, this book can be read as a standalone romance – no surprise cliffhangers.”

“We got to Jerry’s, the Borough Market café frequented by most of London’s food scene elite for the early morning shoot. The camera crew had been on-site for hours, getting some atmospheric shots before sunrise. The restaurant had been closed for us, which John had arranged, with only a few local chefs and neighborhood regulars were allowed inside for filming.

We walked into the kitchen to find the crew set up and filming. I sat on an empty counter while the makeup artist tended to my face and hair. Lucas had not acknowledged me when we walked in. Instead, he stood in the back, chat- ting and laughing with his chef buddies while the crew set up for the recipe shots. 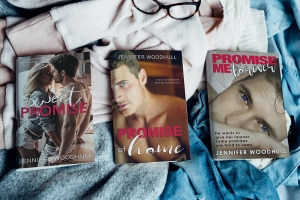 When the set was ready, I joined Lucas behind the counter.

“Someone got up on the wrong side of the bed this morning,” he said playfully.

I just looked at him without saying another word. He shrugged as if unbothered by my demeanor. He started the recipe, and I tried to be charming on camera as I read my lines, but my sour mood was making me come across as stiff and unnatural.

We took a break, and I walked out through the alley door to stretch my legs and regroup. I put my palms on the back of my hips and paced back and forth. I was facing the street when I heard the restaurant door behind me open and shut. I knew who it was without turning to look.

“What do you want?” I didn’t care if he could tell I was annoyed.

“Whoa, what’s your problem today?” Lucas strode up to me and put his hands on his hips as he faced me.

“What’s my problem? You’re the one with the problem!” I crossed my arms in a huff and turned away from him. He threw his head back, laughing wildly.

“What are you laughin’ at?!” Growing angrier by the second, I spun to face him, hands on my hips, my brow furrowed.

“Georgia, you are absolutely precious, do you know that?” He towered over me and tried to take me by the shoulders, but I shrugged him off.

“What on earth are you talking about?” I tried to wrig- gle away from him, but he took my shoulders in his big hands and held me fast. His grip was firm, though he wasn’t hurting me.

“Georgia, why are you angry with me?”

“You sent John to get me this mornin’. You didn’t even acknowledge me when I came in.” My eyes were begin- ning to well up in spite of myself. Damn it! I hated, hated, hated it when I couldn’t control my emotions. He put his arms around me and tucked a curl behind my ear.

“And you don’t know why,” he said. I shook my head indicating no, more confused than ever. My bottom lip pouted just a bit as I stared up at him, betraying all my hurt and disappointment. He gave me a look that flashed between concern and attraction.

“Oh, sweet Belle. What am I going to do with you?” He shook his head a little. “You don’t know what you did last night.” I looked into his eyes, not understanding.

“You didn’t know what I was asking you to do when I asked you to come with me after the shoot, but you didn’t even seem to care. You just came because I needed you. You stayed with me, and listened to me…,” he put his hand up to my jaw, running his thumb across my lips, pulling the bottom one down slightly.

Despite my anger, his fingers left a trail of electricity behind them on my skin everywhere he touched me.

“You didn’t want anything in return. You held me as if… well, anyone who was looking on from the outside might have thought you really did… care for me on some level.” He said the last part carefully. He looked at me like he wanted to kiss me and run from me all at the same time.

“So, you’re sayin’ I gave you what you needed, and you – what? You punish me for it? You shut me out? That’s what you do when someone cares for you?” He looked a little surprised at my choice of words. I was trying so hard not to show my hand, but it had to be evident that I was starting to have some sort of feelings for him.

He was gorgeous, of course, and any woman would be attracted to him. This, though, was something more than that. The time we had spent together on set, and when he had taken me to dinner and toured me around the city… little by little, he had shown me another side of himself. It was a side I didn’t know if anyone else saw, and that guy was someone I could definitely fall for.

Lucas put his face down, resting his forehead against mine and stood there for a moment. “I’ve never met any- one who excites and terrifies me so. When we get togeth- er…,” I started to object, and he put his thumb to my lips again, and this time, I didn’t argue. I knew the decision was already made and though the good-girl upbringing in me wanted to fight it, the woman I was becoming wanted to embrace it, and in the end, the woman was far stronger than even I had given her credit for.“

“We all need moments of escape. With all the demands on us day in and day out, we each need something just for ourselves. Perhaps nothing provides a private moment – a brief respite from every day – like escaping into a great story. When you pick up one of my books I hope you find that place that you can escape to. Explore the streets of Paris with new heroines or fly around the world to reclaim your lost love with a favorite hero. Whether it’s the romance that takes your breath away or those climactic encounters that make your pulse race, I hope you find that solitary moment of enjoyment while lost in one of my stories.”

This book blitz is organized by: Inkslinger PR!