Sea of Darkness by Isadora Brown & Rebecca Hamilton is an Adult Paranormal Romance full of vampires and pirates! 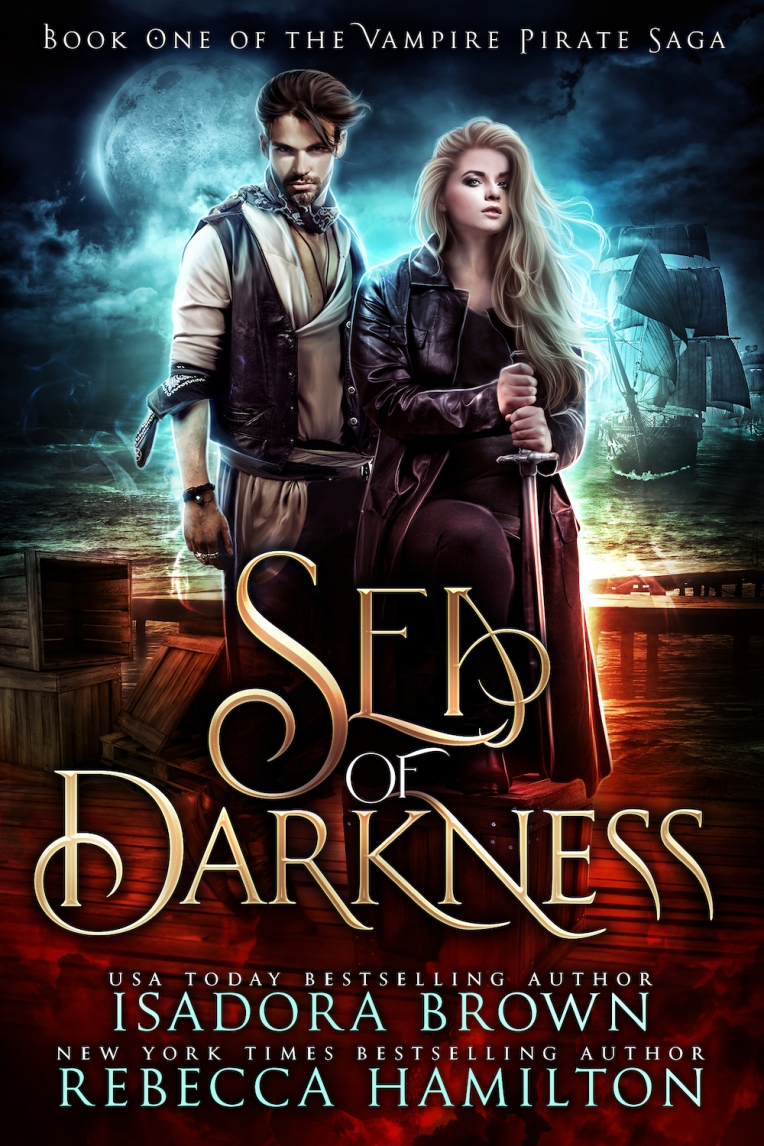 “Working with a supernatural enemy is Kelia’s only hope of solving her father’s murder. But her investigation puts her own life in danger.

The Society’s sole purpose is to protect the general population from vicious Sea Shadows, and Kelia’s their top Slayer. But when her father is murdered and her handler insists it’s suicide, she starts to question whether The Society really has her best interests at heart.

Now, to solve her father’s death, Kelia must work with an unexpected ally: Drew Knight, an infamous Sea Shadow and the most beautiful creature Kelia has ever set eyes upon. A Sea Shadow who, without intending to, just may show her who the real enemy is…and it’ll only cost her one unnamed favor to be collected at a future date.

But after her affiliation with Drew Knight is discovered, Kelia is forced to choose between what she’s known since the beginning of her existence…or a dark, terrifying truth that puts her life at risk.

Find out who dies and who survives in SEA OF DARKNESS, the first installment of The Vampire Pirate Saga, an exciting new urban fantasy romance readers of Sarah J Maas and Karen Marie Moning are sure to devour!”

““There,” he said, pointing at Kelia’s face. “You have a range of emotion littering your face.” He chuckled. “You’re easier to read than a book.”

Kelia bristled. She absolutely detested knowing she was here because she needed the assistance of a Sea Shadow. And not just any, but the most infamous vampire pirate of them all.

“I found out some information,” she murmured. “And I feel you would be able to assist me in what to do with it.”

He tilted his head to the side, his eyes shining. “Do share, darling.”

It was hard to concentrate when he smiled that way. Kelia had known he was dangerously beautiful, but when he was directly in front of her, cocking a smile like it was a weapon and shooting it in her direction, she was completely powerless.

“Well, don’t be shy with the goods,” he prodded. “What did you find that you need my help with?”

She shot him a glare, and he laughed.

“You are so good to goad, darling,” Drew said. “Something you need to work on. You don’t want your enemies to pick up on your weakness. They might use it to manipulate you.”

Kelia arched her eyebrow. “And how do I know who my enemies are?”

Drew’s smirk deepened. “That, my dear, is a very good question.”“

Represented by Rossano Trentin of TZLA, Rebecca has been published internationally, in three languages: English, German, and Hungarian.”

“Isadora Brown loves all things dark, dangerous, and deadly. Things that go bump in the night and send shivers down backs are things she adores. She loves (and writes) sexy, forbidden romance, usually with some bite and a hint of magic. She is the author of The Somerset Series, The Dark Paradise Trilogy, The Stranger Trilogy, and The Neverland Trilogy. You can find her work on Amazon and keep up with her by signing up for her newsletter here: http://madmimi.com/signups/349869/join”