Blood Rose by Rachael Vaghn is an Adult Urban Fantasy out now!

“Fleeing her past and a dark tragedy that haunts her every waking moment, Rose settles for a crummy retail job in a crummy town in the middle of Indiana. Her one solace – the sprawling forest behind her apartment complex – leads her down a dizzying path into a topsy-turvy world where Rose escapes her painful memories…but finds herself at the center of a dangerous plot.

A mysterious (and frequently unconscious) stranger, a technicolor landscape, and a sinister but charismatic leader pull Rose deeper into an unexpected adventure…where nothing is as it seems.

Follow Rose on her journey through this perilous but beautiful land, as she wonders if she can save it…or herself.”

“The stranger was back before long, and Rose didn’t miss the flash of relief on his face when he saw her standing where he had left her. He carried with him a bowl of water, steam rising in tendrils from the surface, and an assortment of other supplies. When he reached her he continued on past, beckoning her to follow, and Rose turned to see him heading toward a small seating area near the door. A low, backless sofa ran along the wall, each end lifting to curl in a tight spiral. An equally low table stood in front of the sofa, and two matching chairs framed either side.

After a moment of hesitation, Rose took a seat on the sofa, and the stranger placed the bowl and supplies on the table before lowering himself hesitantly to sit beside her. He gave her a questioning glance as if asking for permission, and Rose offered her wounded palm. She kept quiet, not wanting her barrage of questions to break the trance she felt from his calming influence. The man chose a soft cloth from the pile on the table, dipped it in the warm water and began to gently wash the blood from her hand. She winced when the water stung the cut, and the man grimaced in apology.

As he worked, the lace cuff fell back from his left hand and the sleeve of his jacket rode up slightly. Rose caught a glimpse of something thick and dark winding around his arm. It appeared to have the texture of an old scar, thick and ridged, but jet black and stark against his pale blue skin. It grew thinner the further down it reached, tapering out into thin tendrils at his wrist, leaving the skin of his hand smooth and untainted. Rose felt his hands falter in their movements against hers, and she looked up to see him following her gaze to his wrist. He self-consciously pulled the cuff back down into place, covering the black lines, and Rose hastily looked away.

“Sorry,” she mumbled. He didn’t respond, only retrieved the cloth and began wiping blood from her other hand. Once both were clean, he let the cloth fall into the now pink-tinged water, and took a bandage from the table. He paused for a moment, before setting the bandage back down unopened.

“You must have a lot of questions,” he said softly, not quite meeting her eyes.

A startled laugh escaped Rose’s throat. That was the understatement of the century. He gave a soft chuckle and she realized she had voiced the thought aloud.

“Yes, I imagine that must be true.” He turned to face her directly, and his eyes met hers. She was alarmed at the intensity in their purple depths, and his voice was urgent when he spoke again, the words coming fast.

“Listen, I’ll explain everything, I promise. But you’re not safe here, and I need you to trust me.”

Rose opened her mouth, but he continued before she could respond.

“I know we’ve only just met, but I promise I won’t let any harm come to you. There’s so much you need to know, and so little time, and I—” he paused, seeming to exert quite a bit of effort to gather himself. He took a deep breath and lifted his eyes to hers. “Will you trust me?”

His gaze bored into her, and without the slightest idea why, Rose found herself nodding. Anything to get that look of desperation off his face.

He seemed to wilt, relief coloring his features, and he held out his hand for hers again. She placed her wounded hand in his, and he flipped it over, palm up. Lifting his other hand, he gently placed his index finger against the gash in her palm, and without warning, a burst of light emanated out of his fingertip where it met her skin.

Rose felt strangely detached, as if she were watching this happen instead of actually experiencing it. She felt no pain, only a bright, comforting warmth that grew to encompass her whole hand. He traced his finger slowly down the length of the wound, the bright light following the path of his finger, and Rose watched in surprise as the line of her blood began to glow bright, the same iridescent glimmer she had noticed when she’d touched the handle of the door what seemed like ages ago.

Rose watched in wonder as the stranger lifted his hand, the light fading. The shimmer faded from her palm as well, the wound sealing in its wake.

“There,” he said, releasing her hand. His voice sounded faint, its resonance muted. Rose looked up, sensing something was off, and found his face pale, nearly white, the silver lines practically nonexistent.

“Are you okay?” she asked, suddenly worried for this man—creature—she didn’t know, but he simply nodded and waved off her concern. She looked down at her palm again in amazement, a thin faded line all that remained of the red gash.

“What was that?” she asked, “How did you—” But her attention was caught quite suddenly by his hands, which were clutched tightly in his lap. He held his right hand wrapped protectively around the left, but past his grip Rose could see the black lines moving on his skin, creeping slowly beyond the edge of his cuff and onto the back of his hand, tendrils snaking across the pale flesh there.“ 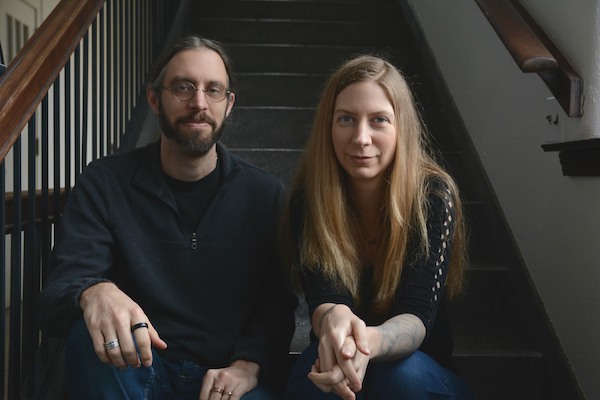 Laura is the wordsmith of the pair, and a bona fide dabbler. With interests in everything from mosaics to wood carving and playing the hammered dulcimer, there isn’t much that doesn’t appeal to her insatiable need to create. When she isn’t writing, Laura stays busy as the co-owner of Firefly Tattoo–one of Indianapolis’s premier tattoo studios–where she is also a full-time artist. You can check out her professional tattoo gallery at https://www.fireflytattoo.com/f88479627.

Trent acts as the bookends of the writing process. He serves as the team’s world-builder and plot developer on the front end, and acts as an editor and proofreader (plus the ultimate voice of reason) on the backside. His educational background in English and psychology help him craft vibrant worldscapes and compelling, authentic characters. When not mired in the trenches of world-building, Trent enjoys reading, playing video games, and practicing jiu-jitsu and tai-chi.

The team shares more than a pen name. Their home outside Indianapolis is also inhabited by their daughter, Seva, and Helena, the world’s fluffiest cat.”

Click HERE to jump on over to Goodreads and order your own copy from your favorite bookseller:

This release blitz is organized by: Xpresso Book Tours!