A Discover of Witches and Shadow of Night by Deborah Harkness are the first two books in the All Souls Trilogy, an Adult Paranormal series full of witches, vampires, and magical books!

A Discovery of Witches (#1) 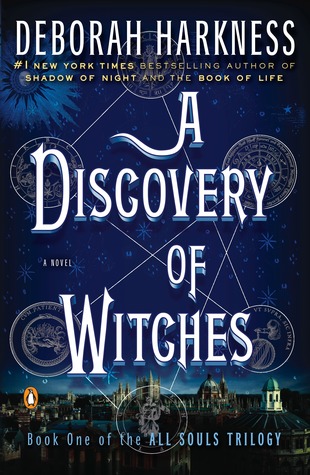 “Deep in the stacks of Oxford’s Bodleian Library, young scholar Diana Bishop unwittingly calls up a bewitched alchemical manuscript in the course of her research. Descended from an old and distinguished line of witches, Diana wants nothing to do with sorcery; so after a furtive glance and a few notes, she banishes the book to the stacks. But her discovery sets a fantastical underworld stirring, and a horde of daemons, witches, and vampires soon descends upon the library. Diana has stumbled upon a coveted treasure lost for centuries-and she is the only creature who can break its spell.”

“Picking up from A Discovery of Witches’ cliffhanger ending, Shadow of Night takes Diana and Matthew on a trip through time to Elizabethan London, where they are plunged into a world of spies, magic, and a coterie of Matthew’s old friends, the School of Night. As the search for Ashmole 782 deepens and Diana seeks out a witch to tutor her in magic, the net of Matthew’s past tightens around them, and they embark on a very different—and vastly more dangerous—journey.”

Almost ten years after it’s release, I get to finally revisit one of my most nostalgic books. I first read this book as my high school’s book club pick, and ever since then, I was hooked! From the inviting characters, to their forbidden relationship, to the magic hidden in the pages, we are thrown into a world that I could not get enough.

If you like the fantasy genre, especially of the YA range, I find this one to be a great bridge into the adult realm. The book features middle-aged characters and a relationship that doesn’t necessarily peak all the way into steamy times, even though there are a few mildly explicit scenes.

In Shadow of Night, we dive more into a historical romance setting. It swivels into a world that quickly transitions right where Discovery left off. We get a little more spark into their relationship while also diving into the magic system and exploring the Elizabethan era.

If you enjoy paranormal creatures, historical novels, time travel, or a deep romance, you need to pick this series up! Highly recommended!

How I Read It: Paperback / Library eBook