State of Lies by Siri Mitchell is an Adult Mystery full of politics and a mysterious death. 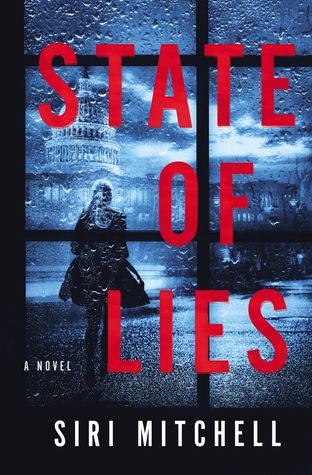 “The secrets of those closest to us can be the most dangerous of all.

Months after her husband, Sean, is killed by a hit-and-run driver, physicist Georgie Brennan discovers he lied to her about where he had been going that day. A cryptic notebook, a missing computer, and strange noises under her house soon have her questioning everything she thought she knew.

With her job hanging by a thread, her son struggling to cope with his father’s death, and her four-star general father up for confirmation as the next Secretary of Defense, Georgie quickly finds herself tangled in a political intrigue that has no clear agenda and dozens of likely villains. Only one thing is clear: someone wants her dead too.

The more she digs for the truth, the fewer people she can trust.

Maybe not even herself.“

If you like political thrillers, make sure to check this one out!

When the main character’s husband is killed in a car accident, her life turns upside down with grief. But as she uncovers more information about that day, the mystery thickens as the accident may not have been as ‘accidental‘ as they claimed.

With the Fall season just around the corner, this cozy mystery is perfect to pick up then! It was a surprising story and completely took me in for the loop.

It is jammed full of politics, so if you like reading stories in that ring, this would also be a fun, Adult read to take on. I gave this one 4 out of 5 stars.

How I Read It: ARC from TLC Book Tours

*Disclaimer: I requested a copy of this book from TLC Book Tours in exchange for an honest review. All of my book reviews contain my honest opinion only and are not influenced in any way.*

Check out other Bloggers’ thoughts through the Official Blog Tour Schedule:

Wednesday, August 21st: Where the Reader Grows and @wherethereadergrows

Monday, September 16th: What is That Book About

This Blog Tour is organized by: TLC Book Tours!

3 thoughts on “Blog Tour: State of Lies by Siri Mitchell”